Specific tasks of this Committee shall include without limitation:

This is a link to the Census Information on New York State's Website: https://www.ny.gov/programs/2020-census

Is the state allocating resources to help libraries?

UPDATE: On January 14, 2020: New York City revealed their $40 million plan for the Census. (We're still waiting on more information from the state about any plans for upstate.)

UPDATE: On December 4, 2019: Governor Andrew M. Cuomo announced local governments can apply for their shares of the $20 million in funding made available in the FY 2020 State Budget and designated to help make sure every New Yorker is counted in the upcoming 2020 U.S. Census. The $15 million is distributed to local governments based on a formula that builds on the Rockefeller Institute of Government's At-Risk Community Index, a data-based measure of undercount risk, while accounting for differences in population density and its impact on outreach logistics. The funding allocations to counties and cities is available here.

UPDATE: On November 19, 2019: Governor Cuomo Announces $60 Million to Support Counting Every New Yorker in the 2020 Census. "A Request for Expressions of Interest will be released next week with a response due back in 30 days. The funding will be targeted to "trusted voice" not-for-profit organizations and will be focused on reaching hard to count communities, including those with high populations of immigrants, children under 5 years old, and seniors. Funding awards will be determined based on plans evaluated on a variety of factors, including presence of cooperating libraries and other institutions, proven capability of the organizations, and other factors."

In 2018, The Fiscal Policy Institute recommended that community-based groups would require $40 million to maximize participation for the 2020 Census among "hard-to-count" residents.

To date, New York State as set aside $20 million for Census efforts. As of November 2019, that money has not been allocated, and there is no indication of how it will be allocated.

In contrast, New York City has allocated $40 million for their efforts downstate, and the State of California has allocated over $187 million, noting on their website: "The State’s funding is allocated for outreach in communities, including sizeable distributions to counties, Tribal Governments and community-based organizations, education, and for associated programmatic costs. Media funding will supplement this outreach by using local ethnic media to target specific communities and cover any gaps identified in the federal media campaign in California. This funding strategy minimizes the State’s administrative costs and funding recipients to the same standard."

If you would like to express your thoughts to New York State about transparency and proper funding for the 2020 Census, please read more about it on NYLA's website, and contact your local elected officials.

The image below will lead you to an interactive map of Hard to Count Communities, so you can target your work on the places of most need in New York State. https://www.censushardtocountmaps2020.us/ 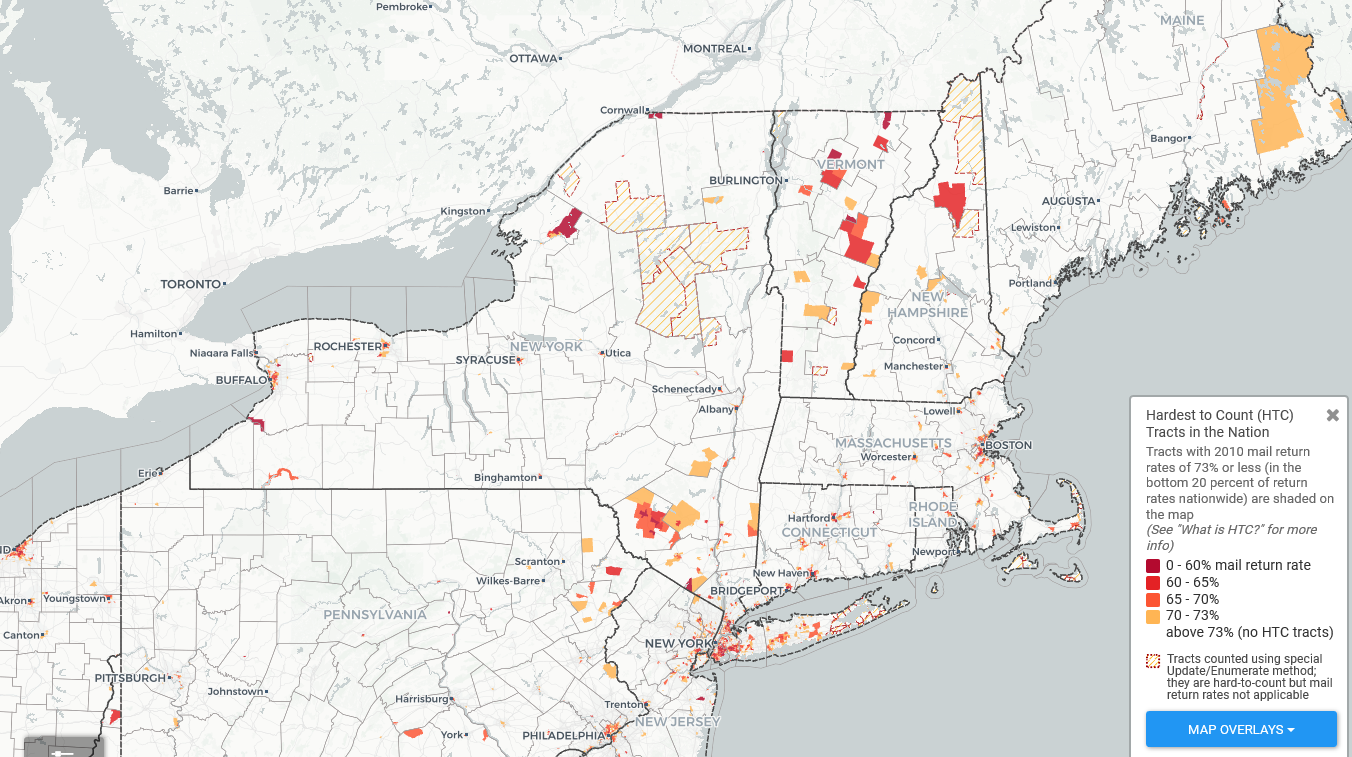 One of the key elements to a successful GOTC campaign is reaching hard-to-count (HTC) populations. Unfortunately, there is no HTC list to go to in order to launch your outreach efforts. Many leading GOTC campaigns are relying on voter files, particularly focusing on low-propensity voters, and connections they already have to the community. Of course, that leaves many of the hardest to reach on no list. State Voices has been working with a range of experts to build a method to create an HTC list. They have worked with Catalist to acquire a list of addresses throughout the country not already in the State Voices VAN, leaving a list of addresses that may be HTC. State Voices will work with your organization to help you refine that list to increase the probability that the addresses have HTC people living there (e.g., overlaying the data on the CUNY Hard to Count map). By narrowing that list to likely HTC households, it will enable you to run a more manageable canvass and/or mail program to identify who is living at the address. Please find more details below and contact accesstfa@statevoices.org to learn more about how your organization can access the tools.

This policy brief offers an overview of the 2020 Census: what it is and why it matters for Western New York.

The brief defines what is meant by "hard-to-count" areas or groups, and why it is important to achieve a fair and accurate count in next year's census.

It was drafted by Anna Blatto, AmeriCorps Communications and Research Specialist at Partnership for the Public Good.

The LCCC has received a grant from the Revson Foundation for training sessions based on the Digital Equity Lab's Curriculum.

Registration is free, and made possible by funds granted from the Charles H. Revson Foundation. The statements made and views expressed, however, are solely the responsibility of Empire State Library Network.

If your organization is working to ensure an accurate count through community-based education, outreach, and assistance efforts for hard-to-count (HTC) communities across the Hudson Valley, you are eligible to for a grant from the Dyson Foundation. Read more here, and be sure to apply by December 8.
Southeastern NY Library Resources Council
21 South Elting Corners Road | Highland, NY 12528
Phone: (845) 883-9065
www.senylrc.org