These are the notes from meetings dating back to 2015.

What is a conflict?

Describe general conflicts that might happen in the workplace.

Control is at the root at most conflicts

One way to diffuse a tense situation: This is how it’s going to work, how do you feel about that?

Problems with security? There’s a lot of people with cameras, and not people. They have panic buttons. And soup cans in a sock – that distracts active shooters. Security people are only as good as the people – it doesn’t help if they’re not qualified.

What do you do about patrons who are being harassed by other patrons? It’s hard to remove them, especially when they haven’t done anything tangibly wrong. The best thing to do is make sure there is a second person there, always have at least 2 people in the library.

The administration has no idea about what the job entails. At least understand how the policies work when they’re implemented. One thing everyone wishes administrators would do is to simply trust the staff to do their jobs.

Images from the brainstorming

Double-click on the images to open them in a separate window & rotate if needed. 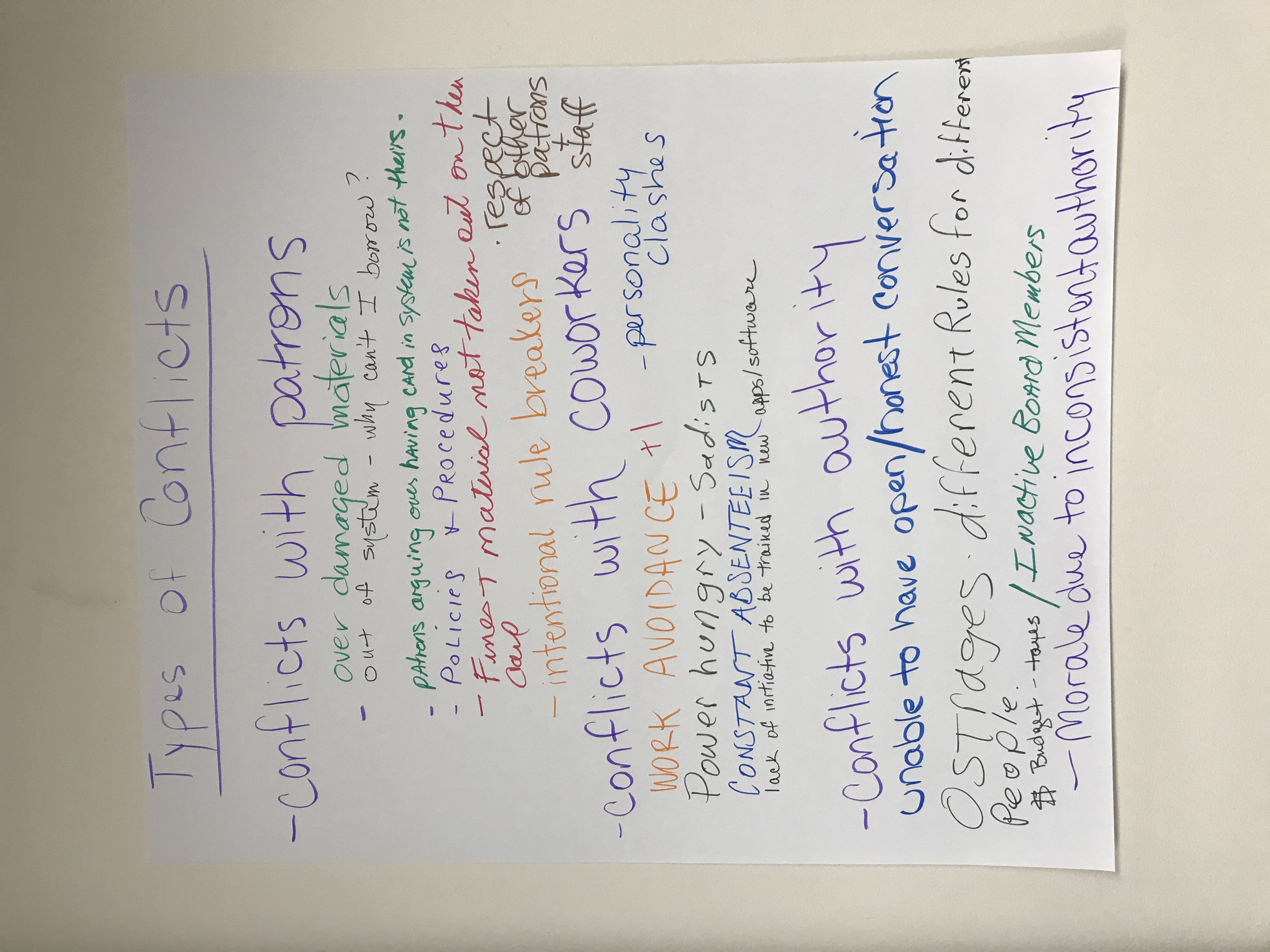 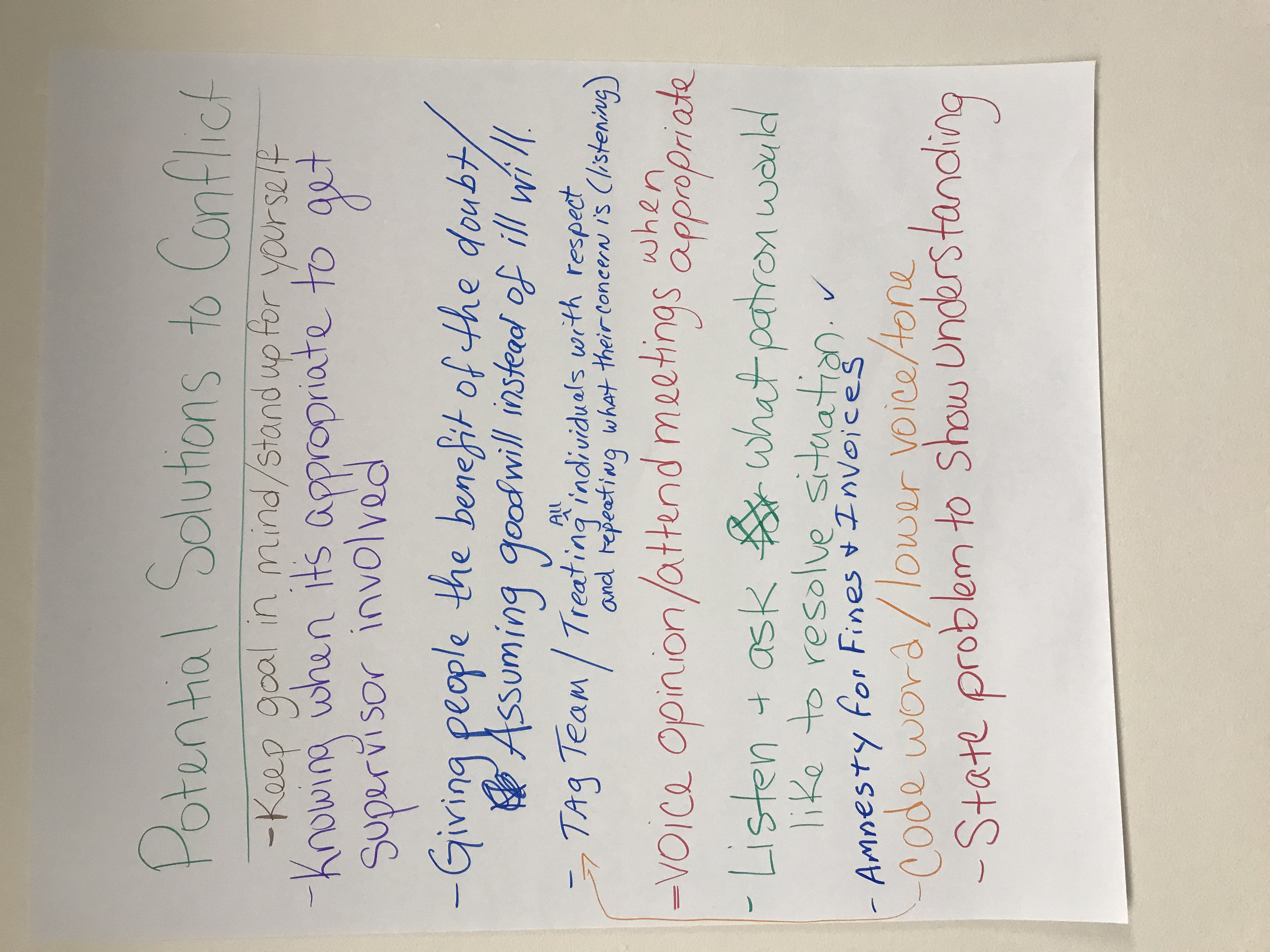 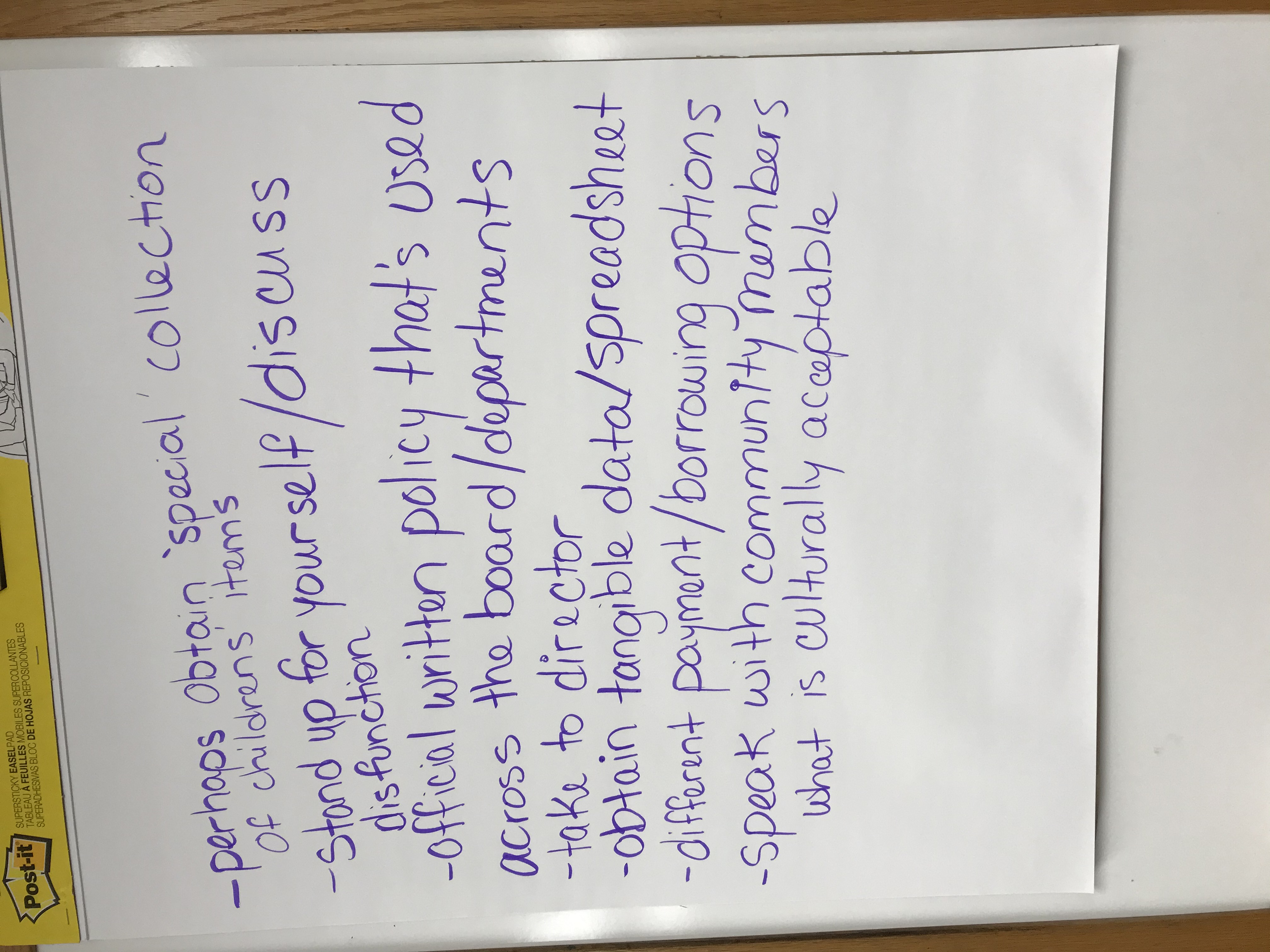 Our volunteer had 5 minutes to introduce their problem, 8 minutes to answer questions, 8 minutes to receive feedback, and 4 minutes to synthesize the information into a potential solution. This is what we discussed:

Introduction: There is a neighboring library that is not part of the library system, so this library has a lot of patrons from that town. There are two in particular that always damage materials and have all their cards blocked. They claim discrimination against them when they are not allowed to take books out anymore. They often come at closing and want to check things out and get irritated. They will start to disrupt the library and cause a scene and the oldest teenaged child is starting to throw things or mess up the desk as the parents have. Another family that is kind will make a scene if they get charged for damage, so other librarians have avoided conflict by letting them get away with not paying for damage. Our volunteer is now in a situation where they are enforcing the policy sporadically, which is a conflict with both the patrons and the co-workers.

Clarification: These people come in a lot, but not always at the same time. Is the problem between you and the patrons or you and the other librarians who are letting them get away with that? It's both, and interfering with the work that needs to be done as the circulation manager. The family will not ever pay for anything, and has a decade-long track record with this. How much is the library losing? It was worse when the kids were younger – sometimes up to $30 a month. Has any outreach been done on the part of the children’s librarian to put them into the children’s library repair section? The children’s librarian does not do that kind of outreach. Are there policies in place that are not being evenly applied? There is nothing in writing, but they hold a standard to have things come back in the way you took them out other than minor wear and tear. They don’t circulate materials that have water damage. Has the board been approached about this issue, either by the patron or the library staff? Has the board been asked to formulate a policy? They don’t have that kind of board, they are not proactive. What frustrates you the most, how the patrons treat you or that you have to take this role? Taking that role is the most frustrating part.

Duct Tape: A local library has a huge sale where they have a lot of leftover children’s books and then they can be put in a use or lose circulation status, so that they can be given away. The only staff member who has stood up to the patron is the subject who is currently explaining this problem. In the future, when you finally say “no more” and you can sit down with the co-worker who is not in agreement with you and let her know about it’s time to enforce the policy. It sounds like they’re lacking an official policy and that would be something to point to. That could get the other librarian in agreement as well. The Board needs to know that it’s happening. The director needs to be involved in it as well. Get some data on how much money has been lost by the family so that you can point to a dollar amount of loss. Offer a bartering system within limits, which works for people who haven’t been able to pay. Thinking about personal relations – perhaps professional development to learn about what other libraries are doing with problem patrons. Talk to someone from the community for suggestions about how to work with them, but make sure that their privacy is maintained.

Integration: Someone once suggested not charging for damages. A formal policy would help that keep them from going over budget. The children's librarian would not put used items on the shelf, so having unwanted sale books might not work. Putting their foot down is hard when you’re working with different personality types, that’s where a policy might make certain they’re not playing favorites. They could get some data, and they do work with patrons with hardships to work out plans for paying.